Santorum and the War Against Women

Dear Madame L,
I've been thinking about what you wrote about Rick Santorum and other right-wingers' ideas, and actual laws that have been passed in some states and are being proposed in others, about how women should not have access to birth control and must be shown ultra-sounds (often obtained by invasive and medically unnecessary procedures) of their fetus before being allowed to have even a medically and/or personally necessary abortion performed.
I think it's kind of weird for these far-right politicians to behave this way while at the same time they condemn Mitt Romney for being a Mormon (and therefore not a true "Christian" like them), for not somehow influencing his church to change its doctrines and policies, for being descended from a polygamist, and so on.
I had to laugh when I read an online review of a book written by a woman who had escaped from her polygamous husband in the modern-day U.S. According to the review:
"Escape exposes a world tantamount to a prison camp, created by religious fanatics who, in the name of God, deprive their followers the right to make choices, force women to be totally subservient to men, and brainwash children in church-run schools." 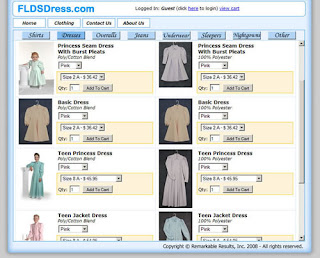 Madame L, isn't that very life for women the logical outcome of following those right-wing "Christians'" ideas about women and the family?
Sincerely,
Still Supporting Romney
Dear Still Supporting Romney,
Thank you for that question. Madame L has found the review you mention, of a book called "Escape," which is available from Amazon.com for $10.20 (and can be borrowed for free from your local library). Madame L wants to add this bit from it:
"Carolyn’s every move was dictated by her husband’s whims. He decided where she lived and how her children would be treated. He controlled the money she earned as a school teacher. He chose when they had sex; Carolyn could only refuse—at her peril. For in the FLDS, a wife’s compliance with her husband determined how much status both she and her children held in the family. Carolyn was miserable for years and wanted out, but she knew that if she tried to leave and got caught, her children would be taken away from her."
Madame L thinks this is the way many women in conservative, patriarchal, "Christian" communities in the U.S., not just among the FLDS, live now, and agrees with you that it could get worse.
But Madame L doesn't think voting for Mitt Romney will resolve this problem. Madame L thinks re-electing Pres. Barack Obama will send the message to the right-wing hate-mongers that they're off base, that the American people want us to continue growing away from the oppression of women and minorities.

Madame L is reminded of an American friend who has been living in Saudi Arabia for a couple of years now and who told Madame L that one of the Saudi royal princes had recently made a $300 million investment in Twitter. Why did this prince not invest that money in improved elementary and high schools, more complete university faculties, and other educational opportunities for his subjects?

Madame L's friend said, "Duh. He doesn't WANT people to have more education. He doesn't WANT people to know what's going on in the world. He doesn't WANT people to think for themselves. He's DOES WANT "his" people to spend their time in school memorizing the Koran and to keep their wives and daughters closed up behind bars and abayas instead of being part of the world."
Madame L thinks this kind of reactionary worldview is exactly what Rick Santorum and his ilk want for women in the U.S.  And she's pretty sure it isn't really because they think women can't make their own decisions. She's pretty sure that it's because they know that women CAN make their own decisions, and they're scared of what will happen when women decide to move away from their patriarchal control.
Again, to quote the bit you sent Madame L from that book review: ""Escape exposes a world tantamount to a prison camp, created by religious fanatics who, in the name of God, deprive their followers the right to make choices, force women to be totally subservient to men, and brainwash children in church-run schools."
Sincerely,
Madame L
Posted by Madame Elle at 10:03 AM