Weird Word of the Week: Thalassemia

Thalassemia is a hereditary disease in which the body makes mal-formed or not enough red blood cells, resulting in a person's being anemic. The word comes from thh Greek thalassa ("sea") and -emia ("blood"). It is most common in people of Mediterranean descent. It's not the same as sickle-cell disease.

That's the short definition. Madame L found an incredible number of websites with much more thorough discussions of the variations of this condition and how it is inherited.

Madame L understood the discussion of the disease much better after she read this "Fun Science" article about the different types of blood cells.

She also found this illuminating definition and discussion:

Here's a great illustration from this article of red blood cells and how they collect oxygen from the lungs to give to tissue cells: 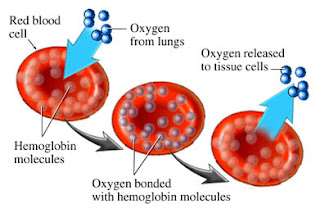 If after reading this you're worried that you may have thalassemia, not to worry: If you had it, you would already know about it, because the symptoms, which include anemia and jaundice, an enlarged spleen, enlarged and fragile bones, growth problems, pale skin, thyroid and liver problems, heart failure, shortness of breath, and gallstones, usually begin within three to six months after birth.