The Path to Palmyra

Remember when I wrote in my first post about the Kinderhook Plates a testimony of the Prophet Joseph Smith by the great LDS teacher and writer William E. Berrett?

He said, among other things:


I have said, and repeat here, “I believe that I know him better than I have known any man in this life save my own father.” By it I mean I know how he would react to every temptation. I know what his counsel would be to me in almost every situation in which I might find myself. He is a great companion. I recommend him to you.

I bear you my solemn witness that I know that he is a prophet of the living God, and that the Church of which we are members, founded by him, is directed by Jesus Christ. May the Lord bless you with like testimony, I pray in the name of the Master. Amen.

Well, now is our chance to learn more about the Prophet Joseph Smith: In the June and July issues of the Ensign magazine there are articles about his life. 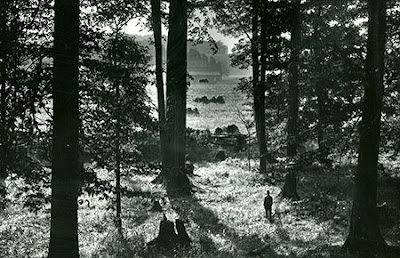 Jeff and I have started reading these in our evening study time, and I recommend them as a wonderful way to learn more about Joseph Smith than you probably did before (if you knew as much/little about him as I did!).

You may be startled to learn that Joseph Smith, Sr., was a prosperous farmer and businessman until he was taken advantage of and swindled by the competitor. (I'd always heard only that they were poor and had traveled from place to place trying to farm.) I learned more about how Joseph's leg was hurt and the surgery that followed. I learned more details about how everyone who was trying to farm in New England in 1815 to 1816 suffered killing frosts in the summer because of the eruption of Mount Tambora in Indonesia.

Here's a bit more from the article:

With mortal eyes, we might be tempted to envision that a more fitting path for such a man and such a moment would be a path of greater ease, efficiency, and acclaim. In recognition of the earth-shattering events about to happen as a consequence of this boy entering this town at this time, could not the Lord, who so carefully orchestrated the placement of the golden plates over a millennia earlier, have provided a straighter, more comfortable and heralded path of arrival?

Yes, He surely could have, but He did not.

There was no prominent, prophetic anointing of Joseph in his childhood (see 1 Samuel 16:11–13). There was no directive dream pointing him to a promised land (see 1 Nephi 5:4–5). There was no curious Liahona to help his family avoid missteps along the way (see 1 Nephi 16:10; Alma 37:38). And there certainly was no open-air limousine traveling along a sunny, streamlined parade route with cheering masses providing a triumphant welcome.

Rather, for Joseph and his family, there was a wildly meandering trail of sorrow marked with bad luck, ill health, poor judgment, natural disaster, crushing pain, callous injustice, continuing obscurity, and unrelenting poverty. This is not to suggest that the Smith family lived in one continual round of abject misery; they did not. But the path to Palmyra was anything other than direct, prosperous, and publicly notable. Lame, limp, and bloodied, the Prophet literally had to be carried to his unparalleled rendezvous with destiny by a nameless stranger.

Remember this as perhaps the first lesson of Joseph’s life and the coming forth of the Book of Mormon. In spite of failure, mishap, and bitter opposition—and in many cases precisely because of those things—Joseph Smith got exactly where he needed to be to fulfill his mission. So, if now or on some future day, you look around and see that other perhaps less-devoted acquaintances are succeeding in their jobs when you just lost yours; if major illness puts you on your back just at the moment critical tasks of service seem to come calling; if a call to a prominent position goes to someone else; if a missionary companion seems to learn the language faster; if well-meaning efforts still somehow lead to disaster with a fellow ward member, a neighbor, or an investigator; if news from home brings word of financial setback or mortal tragedy you can do nothing about; or if, day after day, you simply feel like a bland and beaten background player in a gospel drama that really seems made for the happiness of others, just know this: many such things were the lot of Joseph Smith himself at the very moment he was being led to the stage of the single most transcendent thing to happen on this earth since the events of Golgotha and the Garden Tomb nearly 2,000 years earlier.