I found this book at a library book sale a few years ago and picked it up because of the title and the great cover. I liked how a rooster in front of the sun dominated the cover while a dun cow barely peeked out behind him. 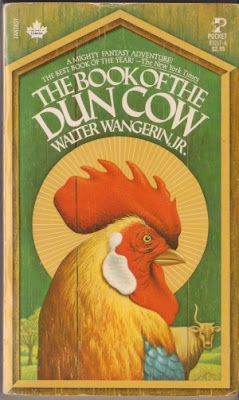 And I wondered what this book could possibly be about: life in Iowa? Election politics? An expose of big farming in Iowa?

Kidding. I'm reviewing this book now because I found it at the library, again, this time in the row of paperback books the librarian told me are "honor-system" checkouts. You have to check these books out like other books, and they have an electronic tag in them so you can't sneak them out without checking them out, but when you try to renew them, the librarians wave their hands and say, "Psh. Just bring it back when you're done with it."

I'm mentioning that because on the bottom of the book someone has written with Sharpie, "SF." Most of the books in that section say "M" (for mystery, I guess), or "T" (for thriller).

So I checked it out, because I knew I would never find the copy of the book I'd bought years ago anywhere in my own library collection at home. I thought I would just skim through it to remind myself of the plot and enjoy the antics of the rooster Chauntecleer, his would-be nemesis Cockatrice, the Dog Mundo Cani, and the other animals.

But I couldn't just skim. I had to read, really read, and I got into the book even more deeply than I did the first time I'd read it. It's like an extended fable, it's like "Animal Farm," it's like "Watership Down," and it's like none of those. It left me with an almost religious feeling of wonder and awe.

How could a so-called "sci-fi" book written in 1978 affect me so much? I looked it up on Wikipedia, and got just the facts, the bare facts. Wikipedia says the book is "loosely based upon the beast fable of Chanticleer and the Fox adapted from the story of "The Nun's Priest's Tale" from Geoffrey Chaucer's Canterbury Tales."

But I think it's so affecting because the would-be hero, Chauntecleer, is not any more of a hero than any of us: he's vain and petty and sometimes mean, but he tries to do what's right. And when he's called upon to lead his people and save them from evil, he succeeds, almost in spite of himself and certainly because of the Dun Cow and the Dog Mundo Cani.

Another interesting thing I learned on Wikipedia is that a musical produced as an off-Broadway show came out of the book, and the author, Walter Wangerin, Jr., wrote a sequel, "The Book of Sorrows," which I'll look for in the library or find online. (I just followed the link to the sequel on Wikipedia and read that it was published by Zondervan, which Wikipedia says "is an international Christian media and publishing company located in Grand Rapids, Michigan."  And I found it on Amazon, so I'll order it and let you know what I think.

Meanwhile, here's an interesting review of "The Book of the Dun Cow."