Guest Reviewer Jeff on "The Signal and the Noise" ---- Part 3

I have a number of friends and colleagues in the Earthquake Science Center of the US Geological Survey. As a group, they are some of the smartest people I’ve ever met. Most of them have PhD’s, and they have spent their lives pouring almost all their thought and effort into one quixotic quest: to predict earthquakes. The ultimate goal is laudable at the highest level: to save human lives.

However, the 220 scientists in that science center, along with at least twice that more in east and southeast Asia, as well as Europe, have little to show for their efforts after 50 years or more of trying. One estimate I’ve heard suggests that upwards of $70 billion dollars have been spent in earthquake prediction research. Sadly, we are just as far away from predicting earthquakes after all that money has been spent than we were a half century ago, and every scientist I’ve talked to about this readily agrees. We understand faults better - we understand (after the fact) why the Great Tohoku earthquake of 2011 was so massive, so devastating, for instance. The thrust-fault was shallow, meaning there was a much larger than usual fault-plane lying above the high-pressure-high-temperature “plastic” zone of the upper Mantle that could accumulate strain. Enormous resources have been poured into a drill-hole project (“SAFOD”) that snakes down past and then into the deep San Andreas Fault. This has been done to better understand the physics of what is happening to rocks in and adjacent to a major transform fault.

After all this, we still cannot predict earthquakes.

But in this research effort an interesting observation popped out (yes, if you apply thoughtful analysis to vast amounts of data there sometimes CAN be a payout). The crucial discovery: earthquakes follow a power law. This is also called the Gutenberg-Richter Law. There is a verbal way to explain this and a graphical way to explain this. The verbal way is this: if you have X number of magnitude 4 earthquake events, you will have less magnitude 5 earthquakes by a certain factor (about a tenth as many). You will then have even less magnitude 6 earthquakes by the same factor. Larger earthquakes will be proportionally fewer, until magnitude 8 earthquakes happen only about once a year on average worldwide. Magnitude 9 earthquakes (like Tohoku in 2011 and Chile in 1960) are very rare - but they happen. There does appear to be an upper limit on earthquake magnitude: they are roughly proportional to the fault surface disrupted. To this end, the San Andreas fault is in most of its length roughly perpendicular to the earth’s surface. This means that down around 10+ kilometers, the rock is so hot and under so much overlying pressure that it turns plastic. It won’t break, but instead deforms and flows, so no more earthquakes. So a magnitude 7.3 is about all you will get from the San Andreas. It’s more than enough to flatten most houses and pancake most hospitals, however.

With this power law behavior there comes the inevitability of more and more smaller and smaller earthquakes, until you literally have millions of tiny events that most humans will never feel - they are only picked up by the most sensitive instruments. Think: sensing a garbage truck driving by your house.

The graphical way to show this power law behavior is again by using a log-log plot. If one axis is magnitude and the other is frequency of occurrence, then all earthquakes fall on a straight line. 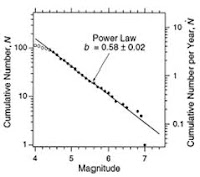 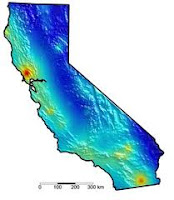 With this you can give a probabilistic estimate of the likelihood of an earthquake of a given size happening on, say the Hayward Fault east of San Francisco (about a 31% chance for an M = 6.7 event in the next 30 years). But you cannot predict WHEN. You CAN budget funds to retrofit your home against such an event, however, and the power law (and some basic information about the length and dip of the fault) will give you a maximum bound for the event.

Forecasting weather is one of the bright spots of the forecasting story. Twenty years ago weathermen generally avoided admitting to people what their jobs were at cocktail parties. They would get flogged for a failed forecast - yesterday, or last week, or on that person’s birthday or planned party. Today TV weathermen still have the same abysmal forecasting success record - less than the 50% coin-toss - but now the failure is deliberate. Like Fox “News” or MSNBC talking heads, the object is NOT to dispense truth, but to make people feel better. If a TV weatherman gave the same predictions as weather.noaa.gov (a free service available to everyone), they would miss some of the rain squalls that hit in nearly every community when the percentage chance of rain is given as, say 20%. They get flogged for missing these. However, if they deliberately over-predict wet weather and it doesn’t come to pass, there is no punishment, no societal memory of a failure. This is just human nature. And advertisers follow the Nielsen Ratings closely.

However, the National Weather Service has gotten dramatically better with weather predictions. In part this is because of better and faster computers, computers that permit modeling (Silver calls this “heuristics”) of ever-finer weather cells. The more pressure, temperature, and wind-speed data available, the more resolution they can provide. But weather is not the same where you are now standing as it is at the top of your highest neighboring volcano. And THAT weather (temperature, wind-speed, wind-direction, pressure, humidity) is not the same as at the altitudes where a commercial jet flies. 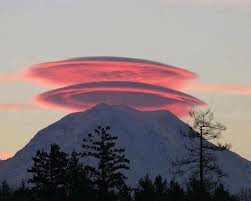 This difference for different elevations gives rise to lenticular clouds forming over volcanoes - often the source of 911 calls about a flying saucer or a volcanic eruption. It’s simply caused by warm, humid air being lifted from lower elevations to higher elevations where lower-density and colder temperatures prevail, causing the humidity to drop out of solution to form droplets: a cloud. These disappear as the air passes down the other side of the mountain. What you see, however, is a cap cloud that appears to be more or less stationary (or, in the case of this double-lenticular cloud over Mount Hood, two stationary clouds).

This is a long way of saying that computer models of the atmosphere must take into account the fact that there is not just a horizontal grid, but a 3rd - vertical - dimension that has to be modeled. Converting any model from 2D to 3D dramatically amps up the computing time necessary - everything is multiplied by the number of vertical levels you want to use. However, Moore’s Law (that computing power doubles about every 18 months) has come to the fore in recent years, and the models have become more and more sophisticated.

But any model implies that you understand the relationships - the physics of how the global weather system works. This is stunningly complicated; weather modelers also have to incorporate effects of mountains (rain shadows), metropolitan “heat islands”, and large water bodies. The temperature is always moderated near a coastline because water has such a high heat coefficient.

Another water-body effect is the so-called Lake Effect. Buffalo, New York, for instance, gets far more snowfall than Toronto on the other side of Lake Ontario (in the opposite direction of the prevailing wind). To an increasing degree, these physics and geographic details - these system understandings - can be folded into the modeling algorithms.

But the critical recent successes have come from making the weather forecast both local and hybrid, by incorporating human beings within the forecasting process. Experienced weather experts, familiar with a local region, can refine any prediction by a computer model (those blurry-looking green clouds rapidly moving over your metro area map on TV), and tell you when the precip will hit, and do this in a probabilistic way.

This probabilistic expression of what will unfold in the future is a hallmark of sophisticated modern forecasting, and builds into it a crucial bit of information: the uncertainty in any model.

What about the other weather forecasters out there? Here’s a dirty little secret: they use the same  government weather forecasts and provide “value added” information like pollen counts and advertising (e.g., Accuweather.com).  They are good at presentation, but the substance is borrowed from the US government, whose minions never complain.

Hmm, very interesting. And thanks for the explanation of what a lake effect is. I've heard that term ever since living on the Wasatch Front, but didn't really understand what it meant. Now I think I get it.