Weird Words of the Day: Fossicking and Gleaning

To fossick is to rummage or to search, specifically to search for diamonds, other gems, gold, or fossils. This word is apparently unique to Cornwall, Australia and New Zealand. It includes the concept of searching in areas that have already been mined, looking for items that have been left behind. 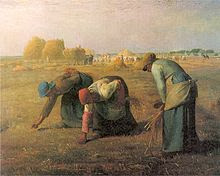 In this sense, it is similar to the idea of gleaning, which is collecting crops from fields after they have been harvested commercially, picking up the remains that are "not economically profitable to harvest," as Wikipedia puts it. Wikipedia also notes, "Some ancient cultures promoted gleaning as an early form of a welfare system, but in reality, it was more of both a community and work-centered - a social safety net for the less-fortunate."


This of course reminds Madame L of the story of Ruth, in the First Testament, where, as another blogger put it, "Ruth’s gleaning [landed] her a lot more than some produce from a field, I can promise you that." And, as we all know, it landed the whole people of Israel the ancestry of their greatest king, David, and of Jesus Christ himself.

Back to fossicking: According to Wikipedia, fossicking in Australia is protected by laws and in some Australian states a license is not required. In some, such as Queensland, a license is required. In other areas, parks and recreational areas have been set aside where anyone can come and fossick for free.

Madame L has done a lot of fossicking in her life, without even realizing it, and she plans to continue doing it whenever possible.

Just as importantly, Madame L is going to make a point of saying the word "fossick" or "fossicking" at least once a day for the rest of this year.