Big Bang Theory and the Bible, Part I

So, when that new supposed evidence came out in March 2014 about the expansion of the universe after the Big Bang, a lot of religious people jumped all over it as proof of the Genesis account of the creation.

The Times of Israel reported then, "That there was a creation event as described in Genesis is indisputably confirmed by this week’s Big Bang scientific breakthrough, an Israeli physicist who is also an Orthodox Jew claims."

According to the article, Professor Nathan Aviezer of Bar-Ilan University said the announcement "make[s] it clear that the universe had a definite starting point — a creation — as described in the Book of Genesis. To deny this now is to deny scientific fact.”

Oops! Does the fact that this evidence was preliminary and incomplete mean that the Genesis account is not true?

This is what I hate about the ongoing and unnecessary argument between current science and religious apologists: If you're going to pounce on every new scientific breakthrough as a confirmation of your beliefs, what are you going to do when the breakthrough is broken?

This is why I think it's great when our religious and scientific understandings coincide, but I never personally base my religious faith on any confirmatory scientific evidence.

It's not that I hold my religion in one pocket and my science in another (as Henry Eyring so vividly described some people's way of dealing with contradictory teachings), but that I get that science and religion are just different approaches to understanding.

With science, I am quick to take a grain of salt with reports of new discoveries, because I'm well aware that these can be quickly refuted and/or refined. In fact, they SHOULD be refined and changed, and refuted if necessary, because that's the way science progresses.

I don't need my religion to be confirmed by scientific evidence. The evidence for religious belief and understanding comes in a different way, which I'll be talking about sometime soon. 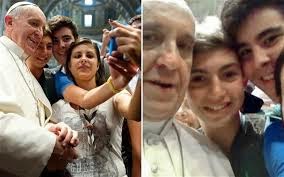 I must, say, though, that I absolutely LOVE that the Pope has come out to say that evolution and the Big Bang theory are real and that God is not "a magician with a magic wand." And I LOVE that Sir Elton John has labeled the Pope as his "hero."

Newsweek reports, “The evolution in nature is not opposed to the notion of Creation, because evolution presupposes the creation of beings that evolve,” Pope Francis said....“When we read in Genesis the account of Creation, we risk imagining that God was a magician, with such a magic wand as to be able to do everything. However, it was not like that. He created beings and left them to develop according to the internal laws that He gave each one, so that they would develop, and reach their fullness.”


The Pope also said that the creation of the universe was not a singular event but “went forward for centuries and centuries, millennia and millennia until it became what we know today.” And I love that, as Newsweek reports, the Pope's remarks are "not controversial among Roman Catholics." Of course they're not!

Here's the transcript of the Pope's remarks on the subject.

I'll have a lot more to write about this in the near future.

Science and religion are each evolving. Both are gathering more information in their own fashion, by their own unique means - which each largely excluding most of the others' sources.

TRUE religion, however, does not evolve to meet the social fashions of the day, but in response to direct revelation.

How to convey that succinctly?