A friend of mine recently posted on Facebook a clip of part of an interview of Stephen Fry, you know, the wonderful actor/comedian who used to play Jeeves, in which he expressed his very candidly bad opinion of God. In The Telegraph's accounting of the interview:

The problem, as the comedian explained in a television interview last week, is that God is “utterly evil, capricious and monstrous”. On God’s watch, said Fry, the world has become a place of “pain and injustice”, where there are insects with no other purpose than to eat children’s eyes out. Thus, if God exists, it is perfectly obvious “that He is monstrous, utterly monstrous, and deserves no respect whatsoever. The moment you banish Him, life becomes purer, simpler, cleaner and more worth living.”


(I'm not posting the interview here. I didn't even look for it online. Because I don't care what Stephen Fry thinks about God, even though he's a funny guy when he's not talking about religion, and I've loved sharing his early work with my nieces and nephews.)

While Stephen Fry delighted a lot of atheists and outraged a lot of religious people with his views, the hugely vast majority of the people on Earth either (a) didn't hear anything about this interview and/or (b) didn't and don't and never will care what Stephen Fry said about God or anything/anyone else.

Among those who don't care about the views of Fry and other atheists were millions who were suffering pain and injustice, without casting reproach on their Creator. And I think it's worth noting that the people who are most likely to claim the reason for their disbelief in God is that God created imperfect humans and insects who "eat children's eyes out" (huh?) and He doesn't step in to solve all the world's problems for everyone are not the ones who have spent much actual time suffering. 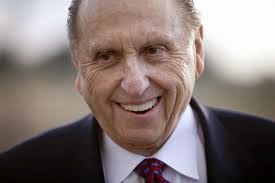 The approach to life that I appreciate and want to emulate is that of those who believe in God and are suffering without blaming God for their problems.


For example, in Thomas S. Monson's book "Consider the Blessings," which Jason and I are reading now, we found the story last night of the woman who, at the end of World War II, had to leave her home with her four children (her husband already having been killed in the war) and walk over a thousand miles. Pres. Monson writes:


She had only a small wagon with wooden wheels in which to convey the family's few possessions. Besides her children and these meager necessities, she took with her a strong faith in God and in the gospel as revealed to the latter-day prophet Joseph Smith.

One by one, her children died and she buried them. When her baby daughter died in her arms, Pres. Monson writes:


Her grief welled up as she knelt beside the little grave, considering all she had lost. She wondered, Was it worth going on? How could she bear it?

As she considered the awful possibilities for ending her own life, something within her said, 'Get down on your knees and pray.' She ignored the prompting until she could resist it no longer. She knelt and prayed more fervently than she had in her entire life:

'Dear Heavenly Father, I do not know how I can go on. I have nothing left---except my faith in Thee. I feel, Father, amidst the desolation of  my soul, an overwhelming gratitude for the atoning sacrifice of Thy Son, Jesus Christ. I cannot express adequately my love fir Him. I know that because He suffered and died, I shall live again with my family; that because He broke the chains of death, I shall see my children again and will have the joy of raising them. Though I do not at this moment wish to live, I will do so, that we may be reunited as a family and return---together---to Thee.'

When she finally reached her destination of Karlsruhe, Germany, she was in the throes of starvation. But in a Church meeting shortly thereafter, she bore witness of her happiness and her sure testimony of the Resurrection of Jesus Christ. She had no doubt that, if she remained true to the gospel, she would be reunited with her loved ones in the celestial kingdom of God.

Here's the book, "Consider the Blessings," available at Amazon.com and at your local Deseret Books store.

Also, it's not that God isn't in control or doesn't care, because he is and he does. ... Which is exactly why we have challenges. If he took away all the horrible things that are wrong with this world and made everything all lollipops and unicorn farts, then he would cease to be God and would be instead...wait for it - Satan. It's because he's God and he loves us that he allows us to grow through exercising that faith in him.

(Although I'm not sure Satan would actually grace us with unicorn farts. Just the regular old stinky smells-like-sulphur variety.)