On Tuesday, June 5, if you live anywhere in North America, you should be able to see at least part of the transit of the planet Venus across the face of the sun.

The show will start just after 3:00 pm on the west coast. Watching at the very beginning and very end will prove most satisfying, according to astronomers, because at those times the movement of Venus will be more obvious than when it's going across the middle.

Don't look at the sun directly, of course! Use welder's glasses (No. 14) or some other safe filter.

Here's an image from NASA of what you might see: 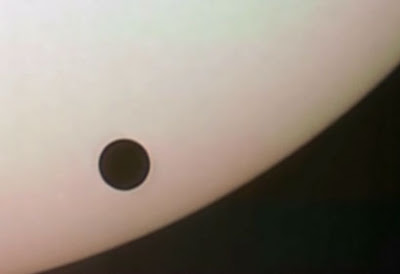 NASA will be answering questions during the event.