Dear Madame L,
If you Mormons are really Christians, then why do a lot of other Christians think you're not? Like the Rev. Robert Jeffress said on "The Last Word" last night, if they really have the same beliefs, then why do two of their missionaries keep coming to his door to try to convince him they're different?
Sincerely,
A True Christian 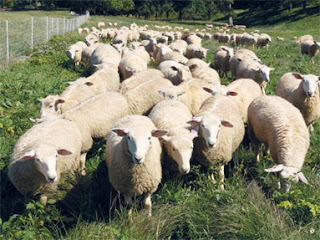 Dear True Christian,
Madame L has read the dictionary definition of "Christian": "A person who has received Christian baptism or is a believer in Jesus Christ and his teachings."
So, Madame L believes, Mormons are Christians. They are baptized in the same way Jesus was baptized and they believe in Jesus Christ and his teachings.
Here's what's different: Mormons believe in another testament of Christ, the Book of Mormon. Mormons believe that this is a translation of ancient records kept on metal plates by earlier inhabitants of the Americas.
The Book of Mormon, like the Bible, teaches of a loving God and his Son, Jesus Christ, who came to earth to live a perfect life, atone for our sins, and be killed as was prophesied in the Old Testament so that He could be resurrected, thereby giving all of us the gift of eventual resurrection and a return to the presence of our Heavenly Father.
(Yes, Dear Reader, all of these teachings are in the Bible. The Book of Mormon prophets explain the relationship between God's justice and His mercy, and how, because of His great love for us and His desire for all of us to return to His presence, He made this plan, before He created the earth, a great plan of salvation and happiness, so we could return to Him. That's one of the things Madame L loves about the Book of Mormon: Its explanation of teachings like this, long lost or misinterpreted. Madame L also loves the way the Book of Mormon prophets explain these teachings and point to other lost books which will eventually be discovered and will add to the ancient testaments of Christ.)
Madame L had to laugh when she heard Lawrence O'Donnell on "The Last Word" last night poke fun at the idea that Jesus Christ appeared to people after his resurrection in the United States of America. Madame L knows that Mr. O'Donnell knows the United States weren't in existence in 33 A.D., but it was a mis-speak that comes naturally to people when they're deriding, no matter how genially, beliefs they disagree with.
Madame L herself is undoubtedly mis-speaking when she points out that Catholics are taught that the bread and wine of the Eucharist are actually Christ's body and blood. Madame L thinks the sacrament of the last supper is a lovely symbol of Christ's presence in our journey through life, but wonders how anyone could think that the idea that the symbols of Christ's body and blood are really His body and blood is a more rational belief than the idea that ancient people in the Americas kept records and that Jesus Christ appeared to them as he did to His people in Jerusalem.
But Madame L digresses. What Madame L started to say is that she suspects a lot of the outrage of the anti-Mormon crowd comes from a much different source than they generally admit, but a source which the Rev. Jeffress inadvertently referenced when he derided the Mormon missionaries who knock on people's doors: This is, simply put, the fear of so-called "sheep-stealing."
Madame L found a great explanation of this idea on a blog called "Apostasy Alert," which notes, "More and more churches are saying that they want to come together in unity in the name of Christ, while at the same time working on ways to steal sheep away from the very churches they attend prayer breakfasts with... Churchianity [sic] has become a very competitive business at a time when very few unchurched people are open to hearing the truth of the Gospel."
Dear Reader, Madame L suggests that you Google "sheep-stealing" for an eye-opening view into the world of competitive Churchianity.
Reading this was a huge revelation for Madame L: Aha! Rev. Jeffress thinks Mormons, through their missionary program, are trying to "steal" his "sheep."
The only answer Madame L can think of for that accusation is this: If people read the Bible and ask the obvious questions, like what's missing here, and why does the text appear to contradict itself there, and find answers to those questions that Rev. Jeffress can't provide, does he really want to hinder them from looking further to find the answers? Madame L thinks Rev. Jeffress should pay attention to what the missionaries want to tell him, about God's love for all his children, about the great plan He created before He even created the earth and put us on it, to bring all his beloved children back to him---not just the ones who are alive today, but all of them. (And, yes, that's why Mormons build temples and perform ordinances in them, by proxy, for their ancestors and others.)
Rev. Jeffress and Rev. Graham themselves admit readily that they aren't the ones who can judge a person's true adherence to the teachings of Christ. But they sure are enjoying their 15 minutes of fame, aren't they, and the resulting increase in income and flock members, that come from their outrage at Mormonism.
By the way, check out what former presidential candidate Jon Huntsman said about Rev. Jeffress:
Best wishes,
Madame L
Posted by Madame Elle at 10:10 AM