Madame L thanks you, Laura, for posting this comment:

"From what I read, this one was only two meters wide. Is it possible that one that small just doesn't make it on the radar (so to speak) of astronomers? Also, people were only injured, mostly from shattering glass as they got close to windows to see what was causing the noise, than from the meteorite itself. I read another interesting blip about why so much of it was captured on dashboard cams - it's because Russians are apparently horrible drivers so many people have dashboard cams as liability protection. But I'm rambling now, and this is your blog, Esteemed Madame Elle, not mine."
In fact, Madame L read the same thing: No one was killed, but people were injured by flying glass and so on, when the meteorite hit in Russia. And, as you wrote, the one that struck Earth was not an asteroid and was small enough to invisible to the astronomers who are tracking these things.

Check out these great NASA graphics showing the space junk in low-earth orbit (LEO) to get an idea of the needle-in-a-haystack nature of the project of identifying all these objects. (Here's one of them, below:) 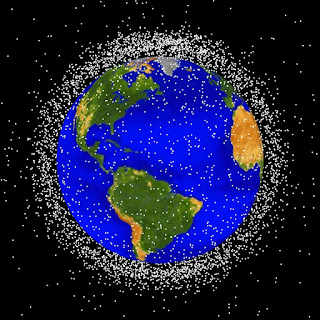 In the cosmic history of these things, Chelyabinsk was a burp. A Short History of Cosmic Pounding:

The Wabar object was ~10 meters in diameter, weighed ~3,500 tons, came from the NW, and left a kinetic energy equivalent to the Hiroshima bomb (20 kilotons of TNT equivalent). It probably was traveling 7 - 10 kph when it hit, but arrived in a shallow trajectory from above Riyadh in 1863, where it probably touched the atmosphere at ~25 kph before it was air-braked substantially.

Wabar was a rare iron-nickel meteor, so it didn't break apart in the atmosphere but reached the sands of the 'Rub al-Khali at a speed about ten times greater than a rifle bullet. It left at least three craters, the largest 164 meters in diameter, and threw molten glass (from local sand and meteor mixing) up to the Stratosphere from its detonation: all that kinetic energy had to go somewhere. The molten glass rained down as smaller and smaller blobs, then drops, wind-sorted eventually down to the size of black pearls by the time you reach 850 meters away from impact point.

It would have been an awesome sight, but you wouldn't have survived seeing it.

The Tunguska object (30 June 1908) was ~50 meters in diameter, came from the SW, and carried enough kinetic energy to first burn (from the flash at breakup), and then flatten, a forest the size of Rhode Island. No tangible materials of the original object have ever been found - it was a stony or a chondrite.

The Chicxulub object came in from the south, was ~10 km in diameter, and snuffed the dinosaurs about 65 million years ago. It left a crater about 170 km in diameter.

In general, if these things are iron-nickel, or big enough stonys and chondrites to penetrate the atmosphere (Chicxulub reached the ground but not Tunguska), they leave a crater about ~20 times wider than the incoming object.

Stonys and chondrites arrive at such high speed (at least 25 kilometers per SECOND just for falling into Earth's gravity well) that the atmosphere can't get out from in front of the object fast enough, and they drag a vacuum behind them. The structural integrity fails between 8 and 12 km altitude, and then they break apart.

When THIS happens, the amount of surface area exposed to ablation increases by several orders of magnitude, and you get the huge flash that set the Taiga temporarily on fire. The sonic boom that broke glass in Chelyabinsk would have happened even if the object didn't break apart - the object is traveling MUCH faster than sound.

About 2% of asteroids in the Solar System, and about 5% of meteorites found on the ground, are iron-nickel. They typically have small amounts of copper and cobalt, and iridium. The latter is not normally found on the Earth, so a clue to the interstellar nature of the Dinosaurs' demise is the iridium found world-wide at the Cretaceous-Tertiary boundary. In Gubbio, Italy, this ash layer is about 2 cm thick. On Haiti and elsewhere in the Caribbean, there are ginormous tsunami deposits.
~~~~~

Revised estimate, based on ultrasound and visual measurements:

Chelyabinsk was somewhere between Wabar and Tunguska in size.

"It is now clear that the Chelyabinsk-bound space rock had a mass of up to 10,000 tons and a diameter of around 15 meters (50 feet) before it slammed into the atmosphere at a shallow angle — around 20 degrees. The meteoroid was traveling at 18 kilometers (11 miles) per second — that’s a whopping 64,000 kilometers (40,000 miles) per hour. NASA scientists are now have an idea about the impactor’s characteristics and they have been able to trace its approximate orbital trajectory around the sun.

But no impact would be complete without calculating its destructive power. Judging by the energy inferred by infrasound stations, scientists reckon the meteor delivered the equivalent energy of 500 kilotons of TNT detonating at the same time. That’s roughly 30 Hiroshima-size nuclear bombs exploding 15-20 kilometers (9-12 miles) above the Earth’s surface. (As a comparison, the Tunguska event unleashed around 30 megatons of TNT equivalent energy — around 1,000 Hiroshima bombs.) So when eyewitnesses saw the stunning contrail overhead, it took a couple of minutes for the shock wave to impact the ground, causing widespread damage.

Windows were blown out, buildings suffered structural damage and hundreds of people were hurt, dozens remain in hospital days after impact. 24,000 emergency personnel have been dispatched to the region to inspect the infrastructure for damage. In total, it has been estimated that the city sustained 1 billion rubles ($33 million) worth of damage."
~~~~~