Did Jesus Have a Wife?

I'm sure you've heard about the newly released papyrus fragment in which Jesus is supposedly quoted as saying something about his wife. Do you think Jesus was really married?

Wondering What This Says About All of Christian "Standard" Scriptures

Madame L does not know if Jesus was married, though she has heard arguments on both sides of that question.

The papyrus fragment you've asked about, called by some "The Gospel of Jesus's Wife," was translated by a Harvard Divinity School professor, Karen L. King, who said the fragment has this bit: “Jesus said to them, ‘My wife ...’ ” And, just below that, this bit:  “...she will be able to be my disciple.” 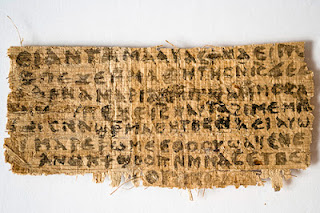 Madame L understands that Jesus's celibacy is such a part of standard Christianity that questioning it may cause some Christians to doubt the standard Christian scriptures. Madame L doesn't think that an artifact such as this represents an actual challenge to the idea, though the idea that Jesus might have been married doesn't challenge her faith.

Madame L has read that some Vatican experts have "discredited" the finding.

Madame L hopes the religious world will wait patiently as this fragment of papyrus with its controversial text goes through the usual rigors of testing before getting upset about it.