Wow, this is such a great read! And you don't even have to be a Mars freak like me to enjoy it! Okay, I'll stop using exclamation points for everything and give a few details: 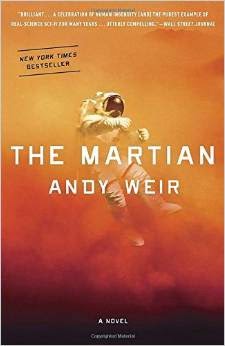 What's so great about this book is that it's not "fantasy" and it's not hard-core "sci-fi," you know, those books from the 60s with the most unrealistic characters anyone could ever imagine, zipping around in unrealistic (not sci-fi, just unrealistic!) space ships and conquering new worlds while having unlimited sex with nubile and even more unrealistic and unrealistically acquiescent female aliens and astronauts.

This book is completely science-driven fiction, a pleasant surprise. And the plot makes sense.

First, how are Earthlings going to get to Mars? Why, with Mars Direct, the brain-child of Dr. Robert Zubrin, of course.  Here's another article about Mars Direct, written by Dr. Zubrin, who not coincidentally is the founder of The Mars Society and one of my personal heroes. (It's because of him that I got to participate in three Mars living simulations in Utah and in the Canadian Arctic a few years ago.)

Second, what kinds of things can go wrong once we get there? Well, just about everything. Author Andy Weir imagines what would happen in an entirely plausible scenario: a team of scientists on Mars has to leave suddenly, but one of the crew members is stuck on the surface, his space suit torn, so they have to leave him behind. They don't just assume he is dead, but his suit's data readout says he's dead. Still, all of them, and especially the captain, are devastated that they've had to leave him back on the surface while they escaped.

However, our hero Mark Watney manages to survive that accident, return to the Habitat, and continue to survive. He's the team's mechanical engineer and botanist, which is not that far-fetched a set of skills to have if you want to be chosen by NASA for their first Mars team, by the way.

And so the book gets even better, and better, and better, Watney solves the problem of food (he grows potatoes from the ones NASA provided the crew for what would have been their first Thanksgiving on the surface), fertilizer for the potatoes (you can guess), water, air, communication with Earth, and every conceivable problem that can come up on the surface of a planet with almost no atmosphere, certainly no breathable air, no available water, and so on.

Science as plot-driver. What an incredibly brilliant and too-infrequently-used plot device.

Anyway, read it. If you want, I'll send you my copy. Nah, changed my mind. I'm keeping this copy, alongside Robert Zubrin's "How to Live on Mars," "The Case for Mars," and "On To Mars."

(Here's Amazon's page where you can order the book. Be sure to read the Amazon review, which is the best of all the reviews I've read. And be sure NOT to order the book that's right under "The Martian" on the first page you come to when you search for the right book at Amazon.com, which is not the book you want, but rather a "review summary" of the book---are you kidding me? What the heck is that? Some guy making a buck off a really good book for suckahs like you and me, or, more likely, students who are so stupid that they think reading a "review summary" will be a better way to spend their time than the actual book? Yeah, I guess that's it.)

I'll talk to my librarian about borrowing this book. Just as soon as I read the other two I haven't finished...