Everybody is talking about how we're going to go over the so-called "fiscal cliff" at the end of this year if Congress won't agree with Pres. Obama about the automatic ending of tax cuts then. Can you please explain?

Not Ready for a Cliffhanger 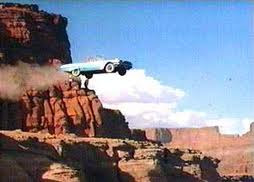 Fortunately for you and Madame L and the rest of this country, the so-called "fiscal cliff" is no cliff at all. Maybe a bump in the road. Maybe a curb. Here's the deal:

Except:  Even if Congress and the President don't agree by the end of the year, Congress can fix it all retroactively when they re-convene in January, at which time they will also not be a lame-duck Congress.

Madame L personally hopes that Pres. Obama will call the bluff of Rep. Boehner and all the Tea Party idiots who are making a big deal about this.

Let the tax cuts expire. Then make a new law giving tax cuts for those earning less than $250,000 per year (or $200,000 for single people) and NOT giving tax cuts for those people who don't need them and who do need to start contributing to the economy, i.e., the 1 percent (who, by the way, are not only not paying their fair share in taxes but are also not doing anything for job creation or anything else to help the country whose infrastructure has given them their wealth).

And, by the way, Madame L thinks all Republicans in the House and Senate should continue to give this message to the lobbyist behind the tax bluff and tax idiocy that's keeping our economy from expanding now:

Somehow I think that photo of Thelma and Louise going over the cliff can't e accidental...
~~~~~