The Lies: President Obama made such a poor showing in the first presidential debate last week, and Mitt Romney did so well, that Obama has lost the election. And polls don't lie.

First, the history of presidential debates show that the challenger almost always wins the first debate, and then loses the election. The electoral vote is not determined by the results of a single night of debating. At least, Madame L hopes it isn't, because if it were, that would mean Americans were collectively a bunch of idiots.

Check out the Electoral Vote website for great graphs and information about the actual state of the electorate.  From that website, here's the situation as of today. 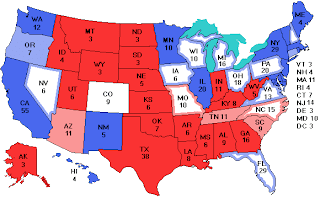 Madame L frequently checks Nate Silver's blog for the latest statistics on the election. He uses not only poll results, and not only debate results, but many other significant factors, to come up with his numbers. As of today, he says, Romney's chance of winning the election has gone up about 18 points, and Obama's has gone down the same amount, since Oct. 3, still leaving Obama with an almost-70% chance of winning the election. This will change between now and Nov. 6.